Edit: I just now noticed how awful that Las Vegas panel was. Its just an aerial view photograph of the city, and its not even traced for fuck sake.

Edit 2: They also missed an L on ‘Lunch’ on Page 5 Panel 5. What amazing editors.

Got into some whirlwind shit this year, to tell you the truth.

But first, heres some comics I’ve been reading recently. 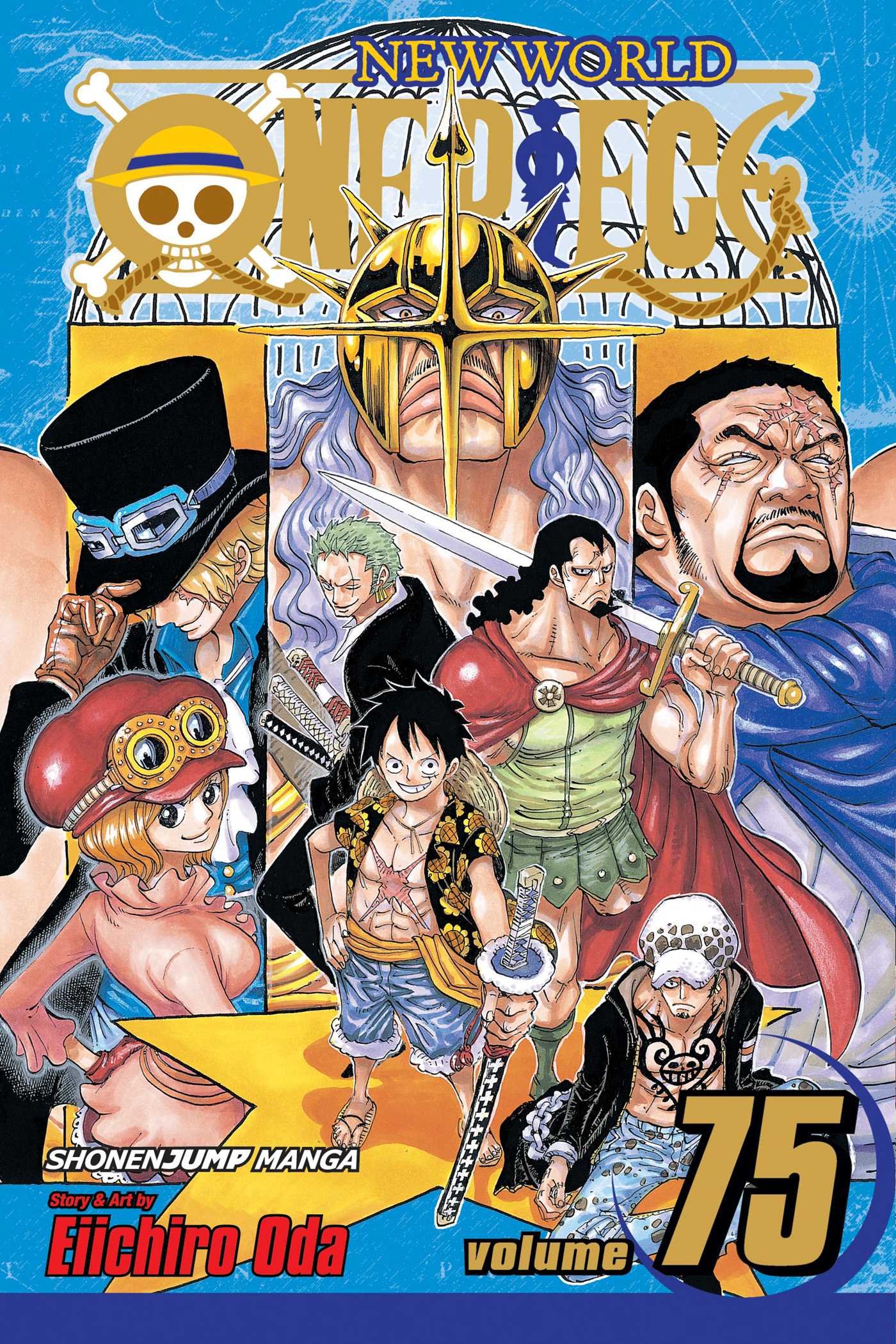 Rating: I’ve been here since the first, and I’ll be here for the last. Oda, you know how to make a fantastic story. 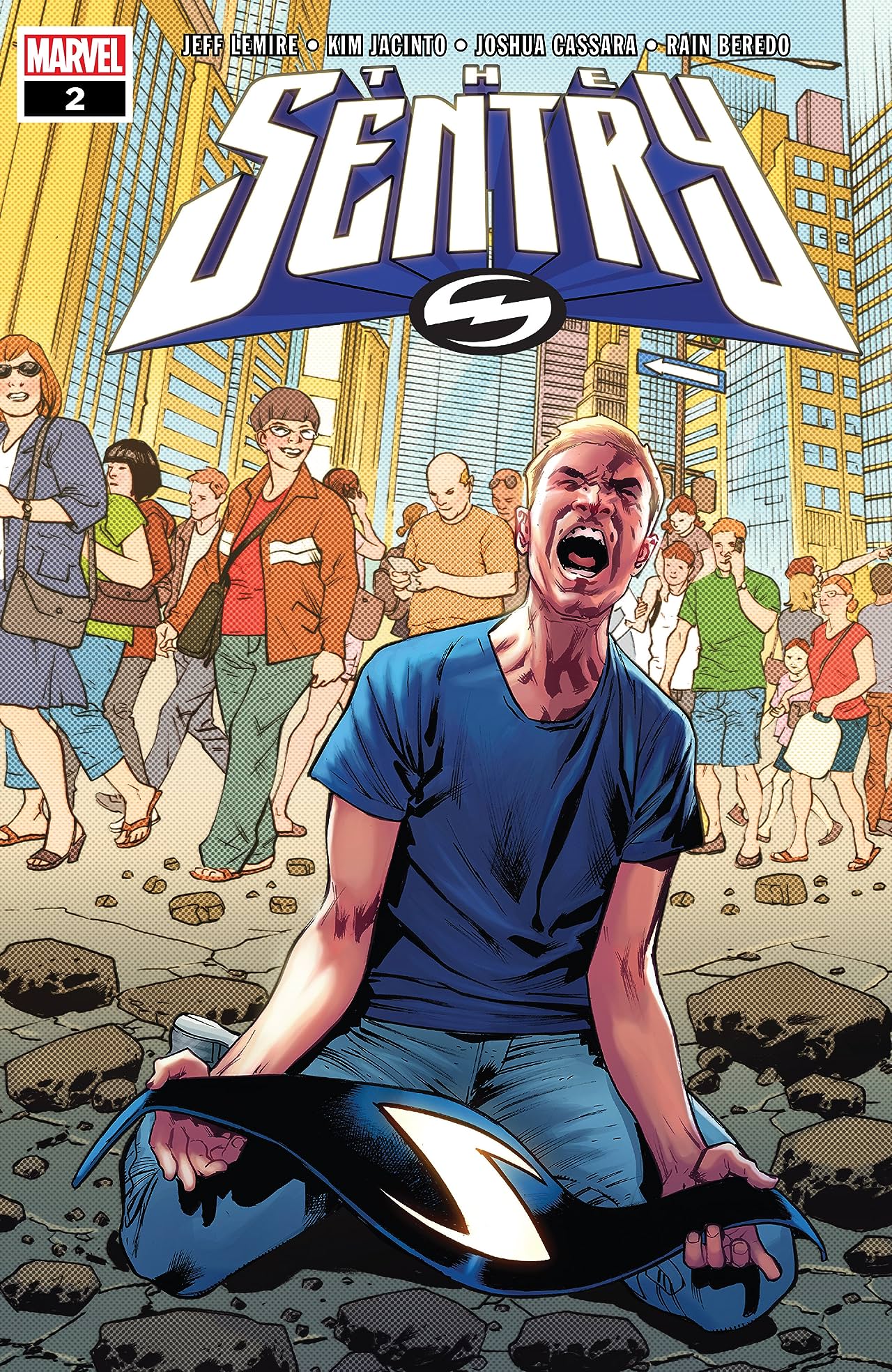 Rating: Was pleasantly surprised with how good this series is so far. Which kinda sucks since Marvel Comics’ output should be top shelf every time. 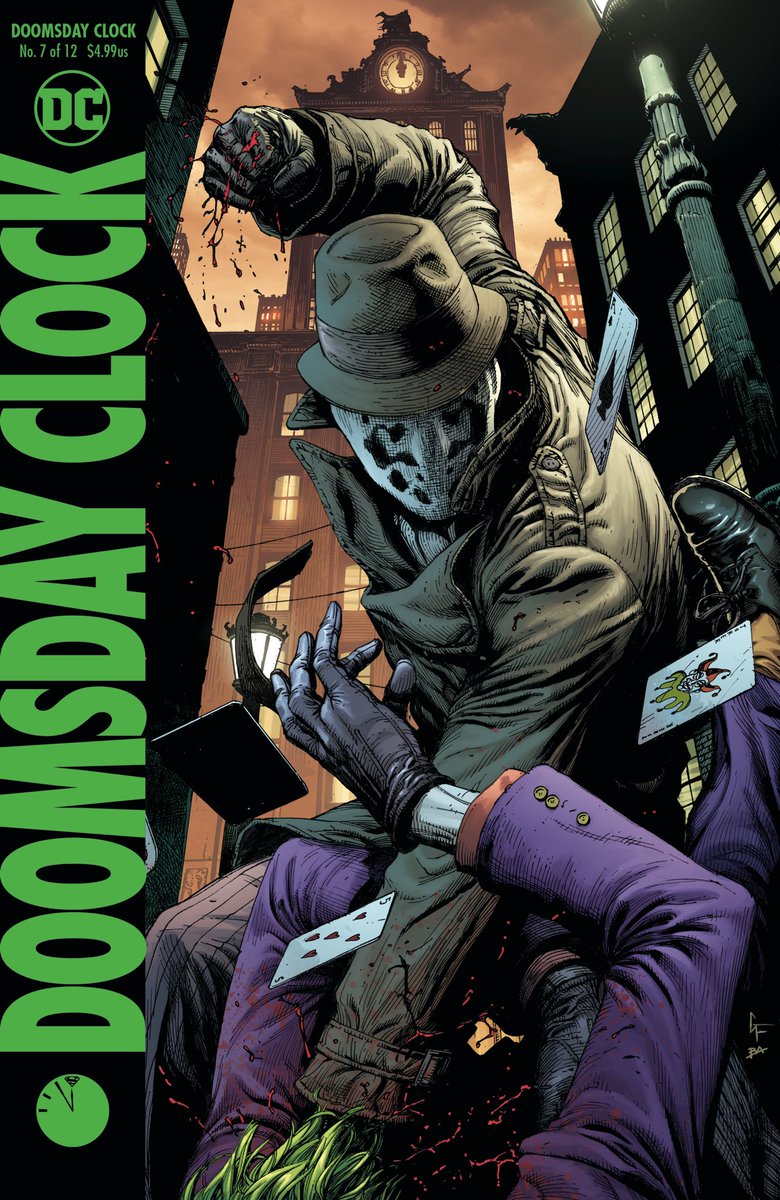 Rating: Enjoying this story-line so far, and honestly if this is all we see from the Watchmen characters in the main DC continuity, I wouldn’t complain. 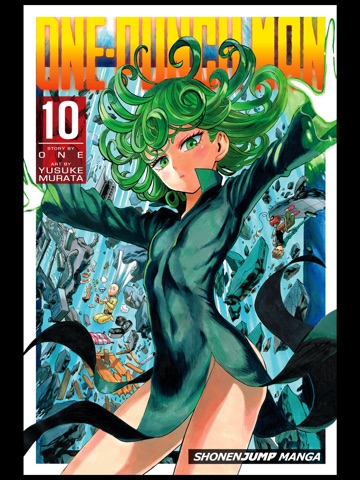 Rating: Lovin’ these volumes when they come out, but I really wish they were longer. But hey dude, it takes a lot of time to do rad shit like this-

Rating: Cool shit. However, that cliffhanger fuckin’ got me excited, thinking: 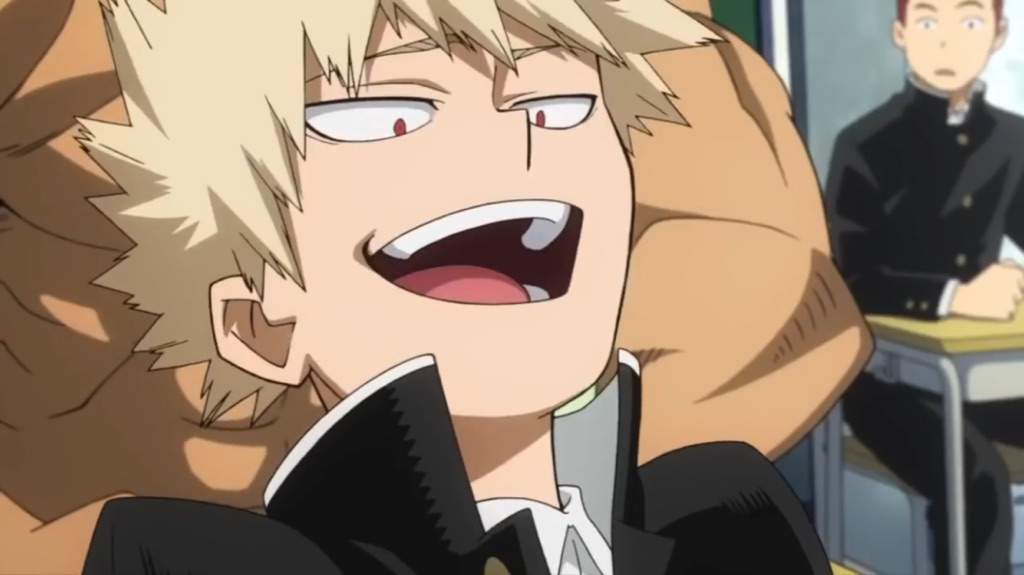 “Oohh, Deku’s gonna finally wipe the floor with you, asshole.”

Been playing some games when I’ve had free time. Like…

I’ve always really liked the Yakuza series. Watching TBFP‘s play-through of the 4th game years ago is what sold me on it in the first place. 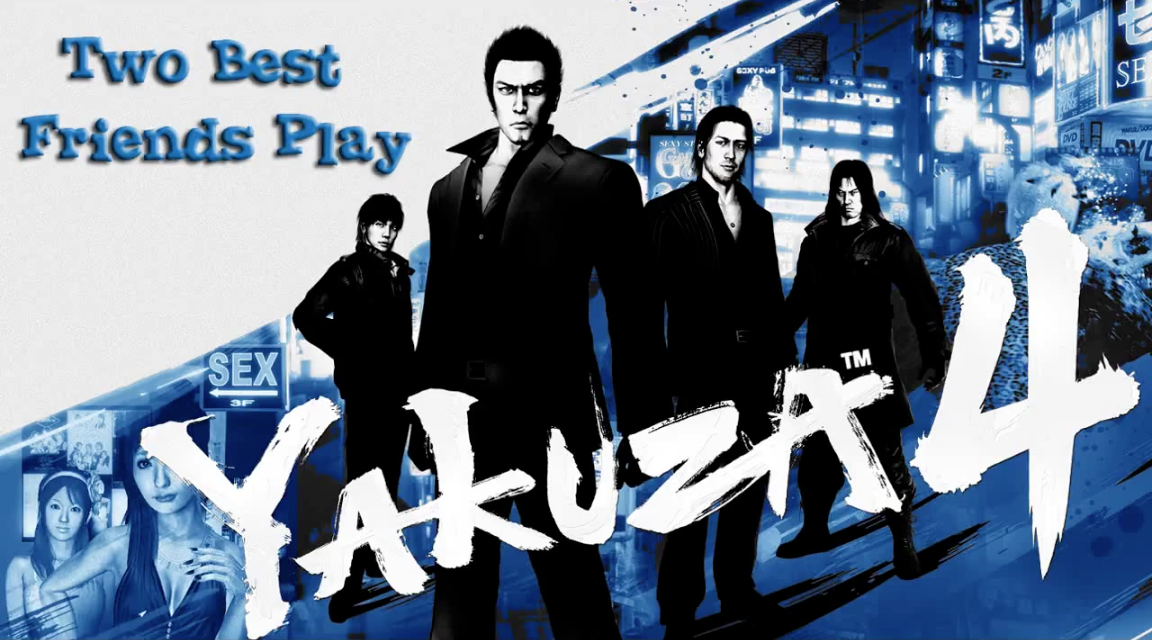 So about a month ago is when I actually decided to pick up my copy and catch up on all the things I didn’t know about the world’s lore.

..I may have made a mistake.

I mentioned getting a new place before with some friends of mine.

We’re currently using this as our logo:

Currently, we have a YT and Twitch channel. Due to the new place, though, our Internet hasn’t been fully connected.

Should clear up by Tuesday, once we get the new Router and then our set schedule should pick back up. (hopefully)

First few episodes of the TCJ! podcast are also done, and those will begin to air on Mondays. (if they’re not sucking each other off, that is)

I have my own streaming channel and Twitter in addition to those.

But… this is pretty weird.

Why would you say “It made you ‘happy’?” I mean, its a really awful situation that can make for an interesting conversation, sure. But saying, “Dude, thats so fucking awesome! I love it! Whoooa, yeeahh. Mmmm… Actually,  think I’m gonna…. head home right now, its getting late…”

Alright so I’m positive he didn’t say that last part, but this right here- 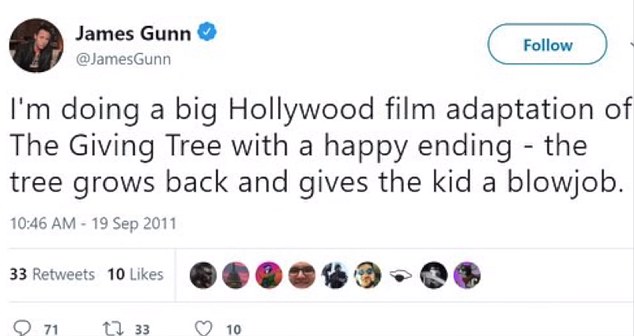 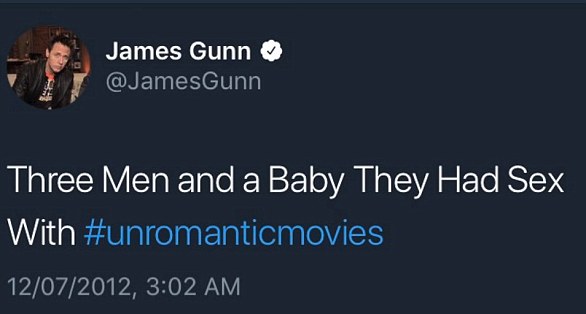 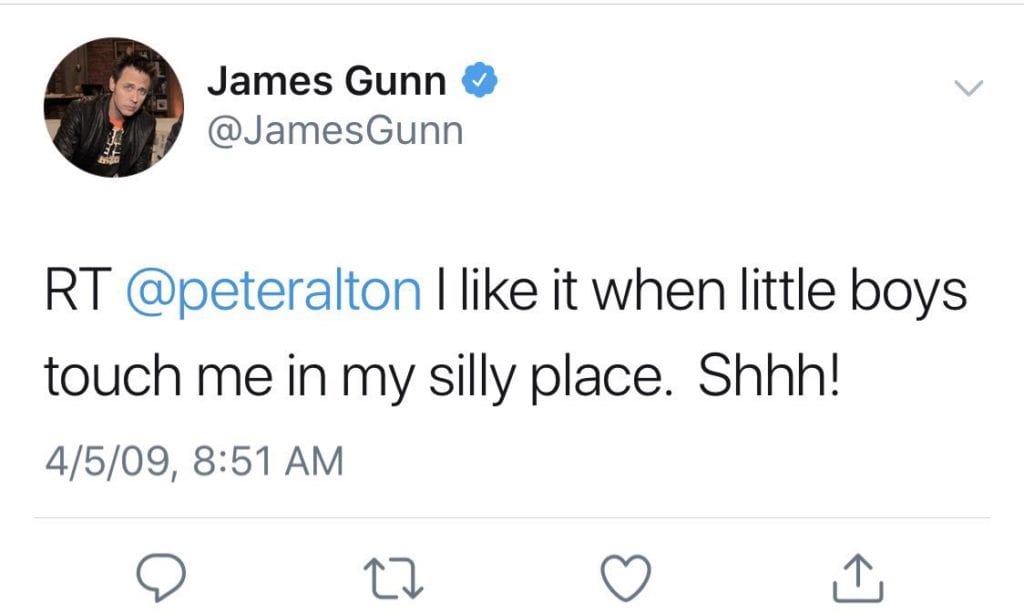 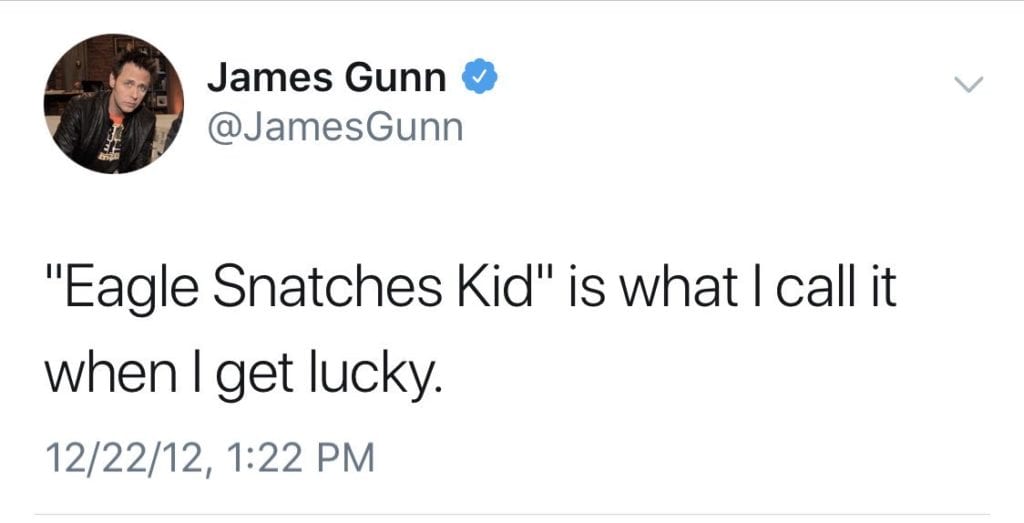 Look theres being ‘edgy’, and then theres phrasing the exact same joke over and over for the sake of shock value an unhealthy amount…in 10,000 tweets no less. Tweets which the majority of he has deleted, save for the select few that you see above.

He did it so much that just NOW people are realizing, “Oi, he really liked to joke about shoving his 7-incher into the rectum of a toddler, ya?” 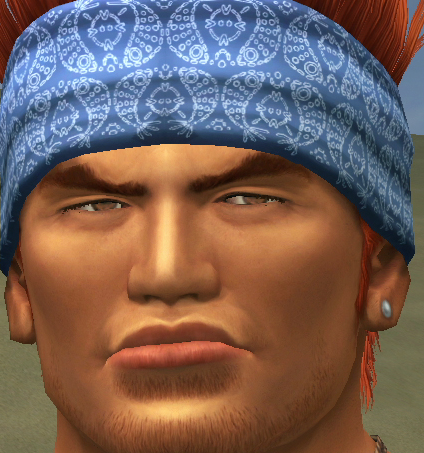 I’m not gonna be that guy who says, “This is just another example of the Left having too much control!” But I’m also not going to be the dude who says, “He was just trying to be funny, guys, you’re being too rough by kicking this talented artist out of a multi-million dollar franchise!”

Yes, it sucks he got fired. It sucks the cast of GotG has given their full support to this guy, and it won’t lead to anything. Same with all the comic fans, movie fans, and fans of his past/future work in the MCU who’ve had their hopes crushed/time wasted.

If you want more info about this controversy, ComicArtistPro Secrets has a great video from today going into the latest developments of this story. 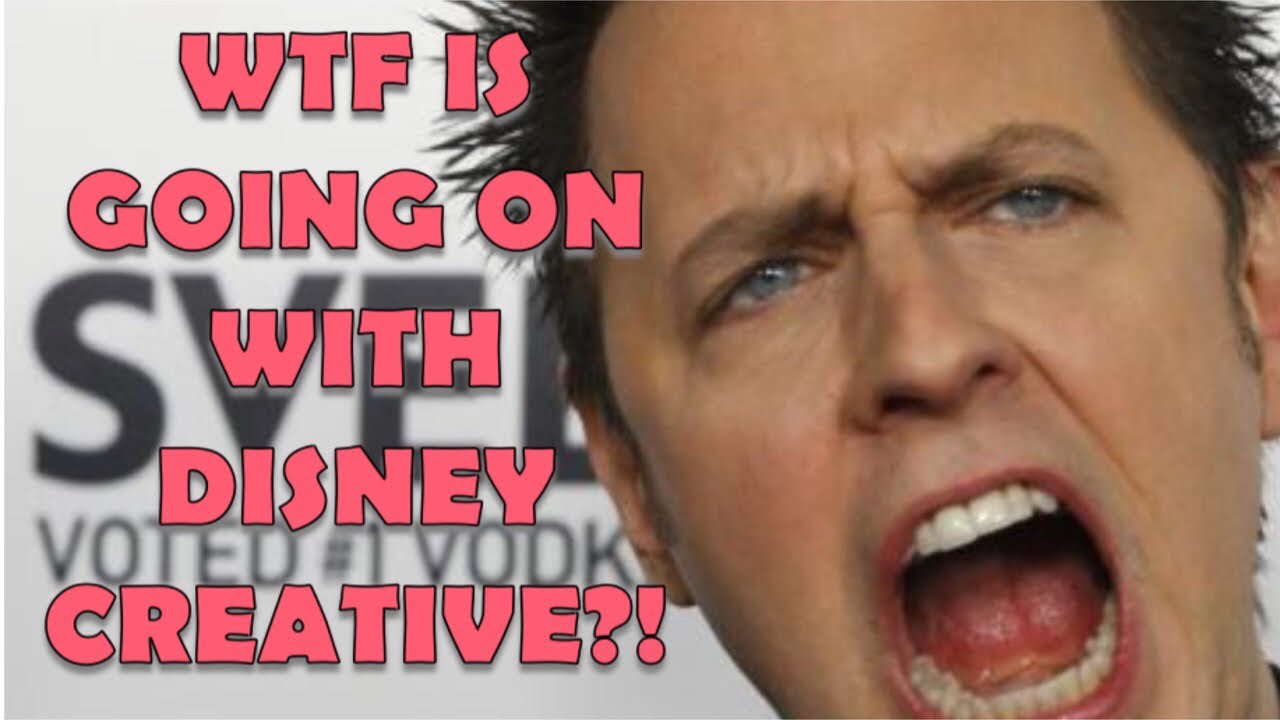 Check it out here.

Since the Internet won’t be ready for a few more days, I’ll be sure to keep you guys posted on our other accounts in the meantime.

Edit: I was only able to make this post by using my college friend’s internet at his place.